History of the School

Hawthorne Valley Waldorf School (HVS) was founded in 1973, chartered by the State of New York as an independent school in 1982, and later received Waldorf school accreditation. The extensive accreditation process occurs every 10 years with a five-year, mid-term review.

HVS began with a request in 1973 from Camphill Copake, whose kindergarten for coworker children was outgrowing its space. In September 1973, the school opened with kindergarten and four grades, the Camphill children being joined by children from the wider Columbia County community, primarily from the Taconic Hills school district. In the next few years the school grew rapidly. At the time there were two buildings: a kindergarten and a lower school building. Hawthorne Valley had about 150 students in 1978, the year the first eighth graders graduated and headed off to attend local public and private high schools.

In the fall of 1979, after the graduation and dispersal of the second eighth grade, the HVS faculty met with one of the school’s senior advisors, Francis Edmunds, who recommended beginning a high school without delay and bringing back as many of the graduated eighth graders as possible. The school immediately began recruiting high school students and teachers and planning a high school building. “The Slice,” as it was termed, built with help from teachers, students, and parents, opened in the fall of 1980 and housed six ninth graders, six tenth graders, and a small faculty that included three full-time teachers (Nick Morrow, Robert Oelhaf, and May Eliot). By 1983, when the first class of seniors graduated, the high school had grown to about 40 students.

In the spring of 1988, a fire destroyed much of the lower school building. Many students finished that school year in donated spaces in Harlemville, and work began posthaste to expand “The Slice” into the main Hawthorne Valley Waldorf School building, with a high school wing and a wing that housed the third through eighth grades.

Since its founding, HVS has been part of Hawthorne Valley Association (HVA), originally called the Rudolf Steiner Education and Farming Association. In the early years, members of all four Association branches (teachers, farmers, farm educators, and the artists and artisans) gathered every Monday evening to discuss issues of the branches and of the whole Association. At first, the school had just a secretary and a separate finance person who did the books not only for the school but also for the whole Association (Renate Field, now Renate Reiss).

In the first years of the school, the College of Teachers made all financial decisions (involving school budgets, salaries, and tuition rates) with assistance from Renate Field and a volunteer finance committee. In 1985, members of the College of Teachers and the parent body began the Board of Trustees, including parent volunteers and faculty. The Board continued until 2005, when it requested (of the HVA Board of Directors) that it become an advisor group for the Council of Teachers. The Association Board decided instead that the school ought to have a governance committee with jurisdictional areas (in financial and administrative matters) distinct from those of the Council of Teachers. The School Governance Committee consists of representatives from the Council, the parent body, and the school community. 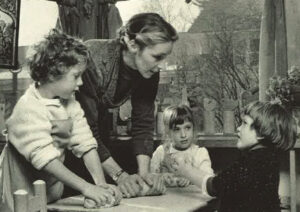 The school’s newest wing was built in 2002 following an extensive capital campaign which raised $2.2 million. Donations were received from parents, alumni, friends, and local foundations. Most recently, with generous foundation support, a soccer field was installed and the basketball court repaved. An expanded production/educational garden was also created.